ICRD highlights from day one

ICRD 2017 kicked off on a warm September day with a full house in the main auditorium of UniS at the University of Bern, Switzerland. CDE Director Thomas Breu welcomed the 350 participating experts and sectoral representatives from all over the world, including 140 guests from the global South, where, he noted, the future of the UN 2030 Agenda and “sustainable development … will to a large extent be decided”. He invoked the image of the three iconic mountain peaks visible from Bern – Eiger, Mönch, and Jungfrau – as standing for the three main themes of the conference: “Evidence. Engagement. Policy.” 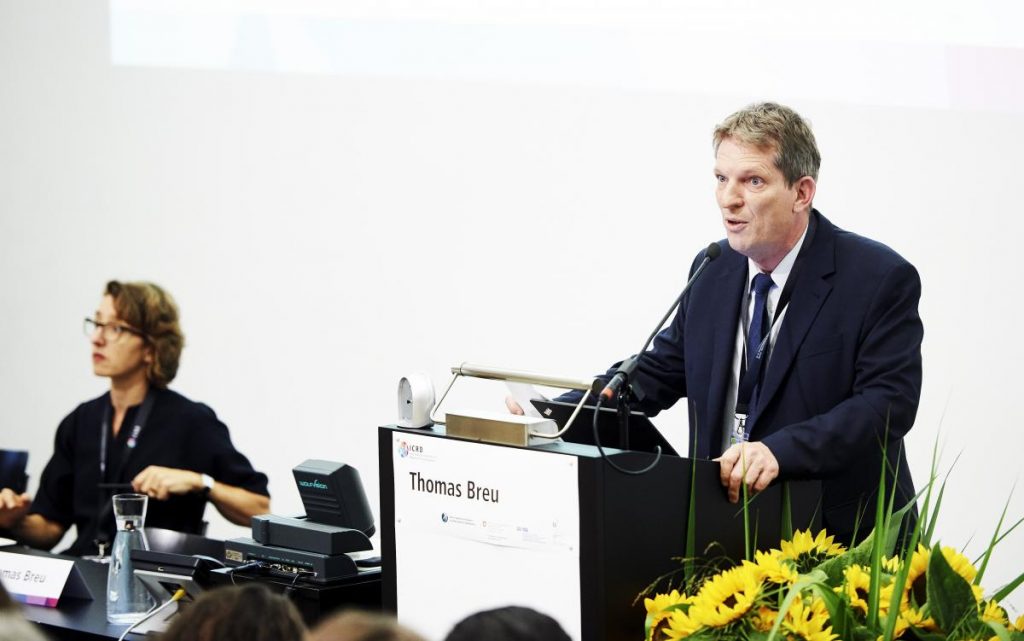 Conference Chair Thomas Breu, Director of the Centre for Development and Environment (CDE) of the University of Bern, opens the ICRD 2017. Photo: Manu Friederich

Highlights from day one included keynote speeches by Esther Mwangi of the Center for International Forestry Research (CIFOR) in Nairobi, Kenya, and Esther Turnhout of the Forest and Nature Conservation Policy Group of Wageningen University, the Netherlands, as well as a closing debate between them and two other discussants. The debate emphasized the importance of bringing research and policymaking together to aid transformations towards sustainability.

In her speech, Ms. Mwangi traced her career development from a young master’s student in Kenya, focused narrowly on vegetation and soil health, to a veteran researcher at CIFOR, now possessing deep understanding of how to turn scientific results into action in policy circles and among communities on the ground. Among the keys to prevent results from winding up “on the shelf” in unread reports, she cited the strength that comes from joining a policy-focused “community of practice”, such as at CIFOR, with colleagues versed in or committed to linking knowledge and practice. Ms. Mwangi also underscored the need to maintain a long-term presence among societal actors, including affected communities, where transformations occur. Drawing on her experience with adaptive collaborative (forest) management and gender issues among communities in Uganda, she noted the importance of getting local people’s “buy-in” by gradually helping them understand the advantages of a particular strategy, such as allowing women to participate in tree planting or practising beekeeping as a livelihood alternative to use of degraded forests. Finally, Ms. Mwangi described how development researchers can build bridges between national or subnational authorities and local people, by continuously liaising with both groups and even communicating to rural communities about (e.g. tenure) laws and rights they can benefit from, but might not be aware of. 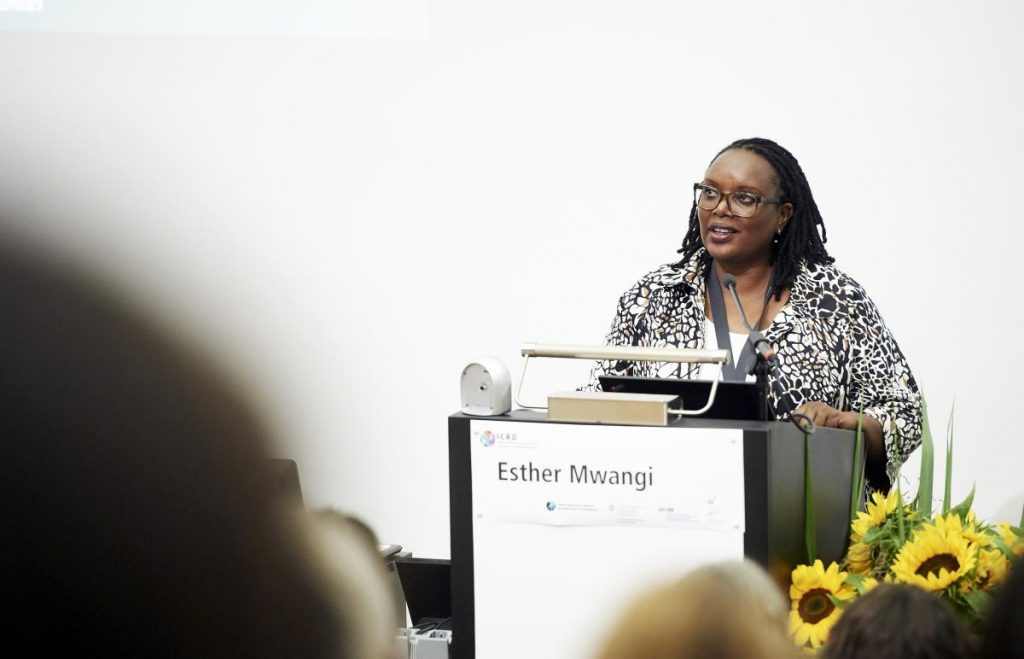 Ms. Turnhout’s keynote remarks focused on “democratizing development research”. She noted current challenges of societal scepticism towards (e.g. climate) science, but emphasized the need for researchers themselves to take responsibility and “build the necessary trust” in what they do. Regarding scientists’ role in contributing to policymaking, Ms. Turnhout emphasized the need for researchers to reflect critically on the overall political and institutional context in which they look for answers to questions set by themselves or prescribed by others, including funders. She offered the example of scientists choosing too narrow a research question and unwittingly serving the interests of recycling lobbyists over advocates of (possibly more environmentally sustainable) container reuse. She also provided an example of biodiversity researchers favouring particular measurement methods that inevitably foreground the (environmental) advantages of protected areas, while downplaying their possible harms to disadvantaged populations who rely on use of natural resources. To sum up, Ms. Turnhout stressed that scientists must consider and be accountable for their own “selectivity” – of research questions or methods – and strive from the beginning not to reproduce power imbalances when generating knowledge. 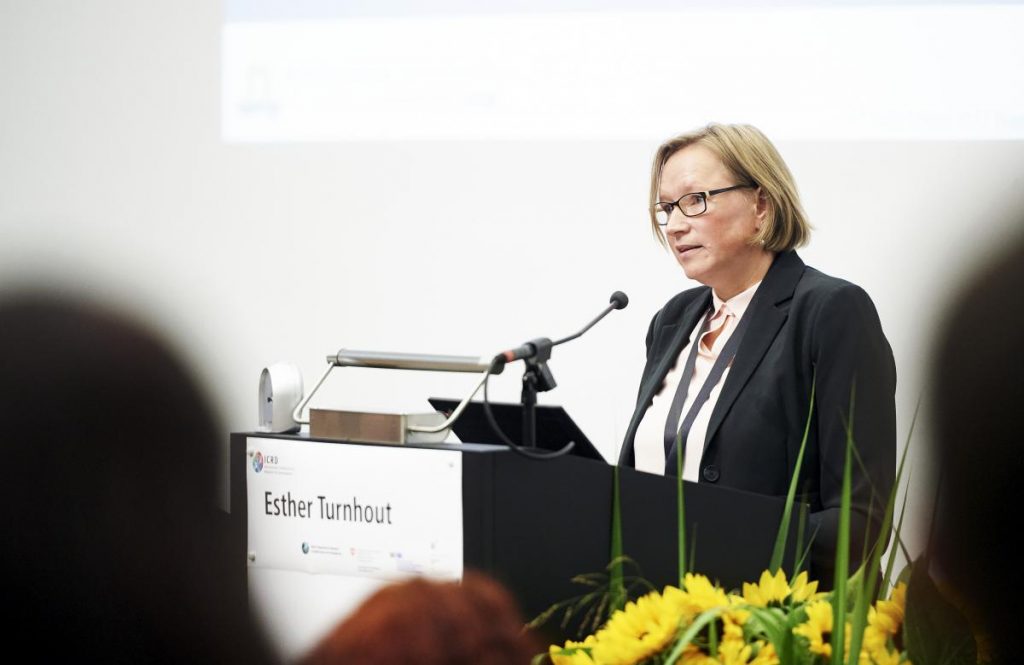 Referring to the 2030 Agenda and related sustainable development goals (SDGs), Mr. Ullah described them as providing a much-needed “lingua franca” for diverse global actors to discuss sustainability challenges. But he stated that the 2030 Agenda and SDGs did not offer a clear, implementable “roadmap”. Here he stressed the need for science to generate evidence that would enable implementation of the “ambitious” goals on the ground in different countries. 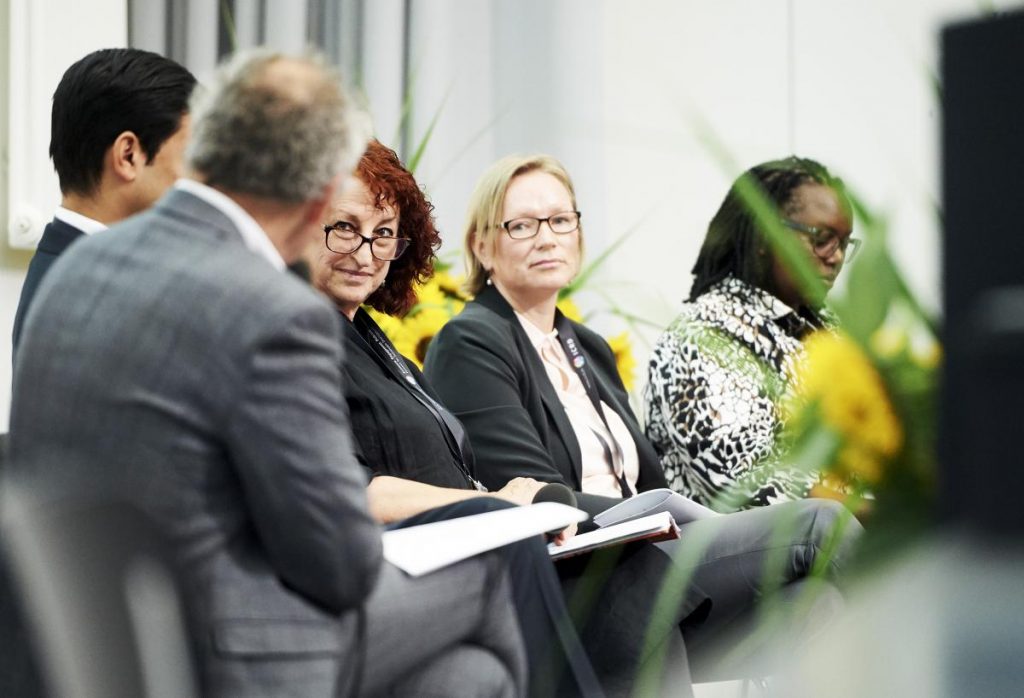 In her debate comments, Ms. du Plessis echoed the call for researchers to be aware of the overall political context in which they work. She also emphasized the need for improving “science communication” to connect with societal actors and the usefulness of products like policy briefs to reach political decision-makers. Finally, she encouraged researchers to consider conducting research outside of traditional institutional settings (e.g. universities) and to take up the challenge of transdisciplinarity – including valuing the knowledge of non-scientists.

Key messages to emerge from the day one keynote speeches and debate include the following (in no particular order): First, focusing on the “interface” between science and policy is too narrow; the role of society must also be considered. Where possible, generated knowledge should be shared directly with the public and enable anyone interested to influence policymaking as well. Second, researchers should consider the wider political context in which they operate when designing and conducting their research, thinking in advance about whose interests their research may serve or neglect to serve. Third, efforts towards improving science communication are central in order to make sustainable development science more understandable, trustworthy, and useful to policymaking authorities and to the wider public. Fourth, the implicit demand on scientists to be simultaneously “policy-relevant”, but not overly “policy-prescriptive” remains a challenge (partly resolvable with use of conditional language). Fifth, researchers and research funders ought to take more risks, including addressing politically sensitive topics, supporting capacity building, increasing participation, and building long-term partnerships across disciplinary, sectoral, and societal divides. Sixth, experienced scientists should use their accumulated knowledge to offer policy advice when opportunities arise, even if they have not had the time to fully analyse their latest data. Finally, enabling researchers to better contribute to policy likely requires re-examining how their career success is measured, for example by valuing policy outputs alongside traditional benchmarks like peer-reviewed publications.